When we left off last time, we’d just finished up configuring a DevOps CI Pipeline and (hopefully) run a successful build which published a package to our Azure Artifact Feed that’s going to act as our npm Registry override. Today we’re going to cover actually using that package our SPFx project.

Here are links to all of the posts in this series:

While we’re on that topic, this has been a much longer series of posts than I’d thought. Do I waffle too much? Let me know in the comments section below :)

I’ve made many assumptions already, I’m about to make some more, hopefully one or more are true:

If neither of those are true, I suggest that you follow this SPFx tutorial before continuing

Hopefully you’ve not yet forgotten the details I told you not to forget… but if you have, let’s quickly rehash.

If you only have one Artifact feed it’ll be pre-selected and you can continue. If not, select the feed we created previously.

Make notes of the name of the feed and configuration details here so you don’t need to come back later :) 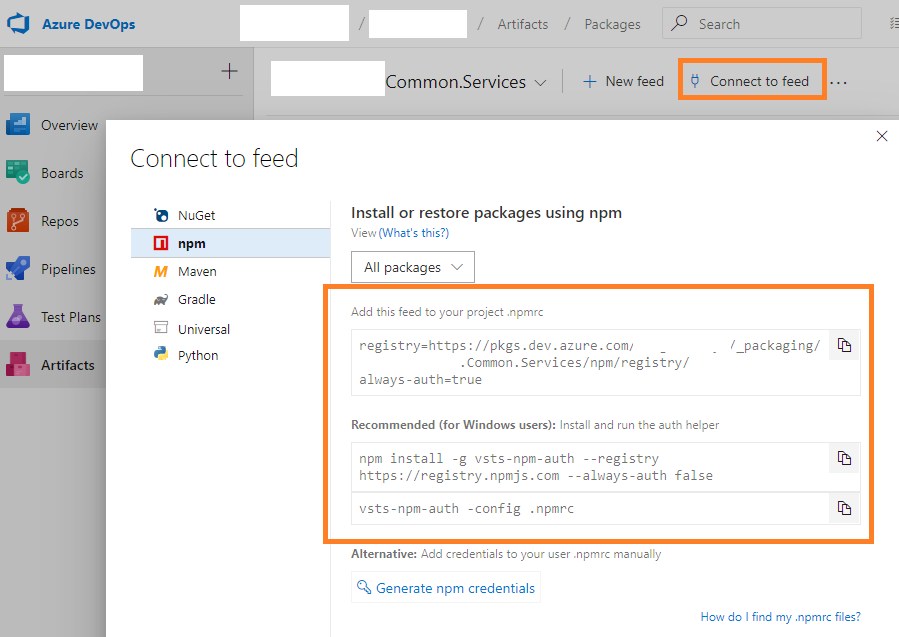 Make notes of all of the details contained therein (again), or simply leave the page open.

Add a new file called .npmrc to the root of the project. Paste the text from the Add this feed to your project .npmrc section, e.g:

Next up, we need to authorise your system to be able to use Azure DevOps (vsts) as an npm Registry replacement. Open up your favourite terminal (I’m using PowerShell within Visual Studio Code) and enter the following two commands in order:

We’re now ready to install your package within your consuming project.

Return to the Overview of your package within the Artifact feed, and then make a note of the “Get this package” command.

Now, go back to your terminal and run the following command (per your configuration):

All going well, you’ve now installed your published artifact as an npm package within your consuming project. Yippee!!!

Now it’s time to actually consume your package within your project, so let’s get to it.

Open up your main .ts file for the WebPart, and add the following import:

Now, go to your render() method and do something similar to this:

Now run your WebPart in your Workbench and open up your console to (hopefully) view the output from your new fandangled library package that you built and hosted on Azure DevOps as an npm Registry!

Pretty cool huh? (not the string output, I mean the Library package being consumed by SPFx).

Final thoughts and an overview of what we’ve achieved

Forget for a second how long this series of posts has been, and that we’ve done something extremely simple in a very convoluted manner.

I’ve highlighted here how to create a TypeScript Library project, persist it to Azure DevOps Pipelines, build and bundle it using Continuous Integration, and publish it to an Azure DevOps Artifact Feed, which is then used as an npm Registry replacement.

The example class was merely for string truncation which in itself is pretty benign, but consider the scenario where you’ve got a large amount of List, Library, Search and Term Store manipulation code that you need to share between multiple projects.

That scenario is where this particular solution really shines.

OK, so what? Can’t we now create Library components directly within SPFx?

Well yeah, but like us, you may not want to be constrained by:

Or any of the following…

As alluded to in earlier posts, we needed a production ready solution that is extensible and compatible with any other libraries we choose to build in this way, and what I’ve highlighted here certainly fits that bill.

If you’ve made it this far, thank you.

Please feel free to point out any errors or omissions you may have noticed :)